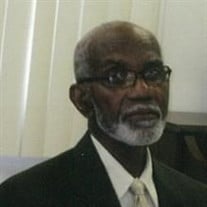 Samuel (Sammy) Cromwell, the eldest of 9 children was born on December 24, 1939 in British Guyana, Now Guyana to Samuel Solomon and Feodore Cromwell. Samuel grew up in Buxton Village and at a very young age he began to be the role model for his younger siblings. He was always interested in reading, learning and aspiring to greater heights. He was a member of the Boy Scouts. He attended Tutorial High School where he excelled as a student. He completed his education at Howard University in Washington, DC where he acquired a Bachelor of Arts degree in Accounting. His younger siblings emulated him, and soon they too were bringing home excellent grades. According to one of them, he excelled in life far beyond his greatest expectations because of Samuel’s influence. His influence was so strong on the family that all of his siblings are now college graduates. His children said their father encouraged them to pursue their dreams. Samuel was a devout member of the First Seventh Day Adventist Church in Washington DC, where he served as a Path Finder Counsellor and Treasurer. In 2004 he and his wife relocated to Avon Park and became members of Ridge Seventh Day Adventist Church where he was an usher. He believed in God and the power of prayer. He loved to Sing. He was a member of the EC Mass Choir in Washington, D.C. He also joined the Sanctuary Choir at his church. Samuel also loved to take daily walks around the Lake Olivia by his home, but he enjoyed them more when he took his only grandchild, Jasmine walking with him. He loved hearing her call him on the phone and ask “Grandpa how are you feeling?” Samuel “always did it his way”. He believed in managing his own time and not to be managed by time. He had a sense of humor, even though you had to look for them in jokes he told. He worked for the Immigration and Naturalization Services and later for United Health Care. Samuel leaves to mourn his wife, Ellen and children, Eddie and Cindy (Warren) and granddaughter, Jasmine; his siblings Pearl, Ivor, Denny, Maxie, Rose and Claudia; his uncle and aunt, brothers and sisters-in-law, many nieces and nephews and cousins. His was a life well lived. May he rest in peace.

Samuel (Sammy) Cromwell, the eldest of 9 children was born on December 24, 1939 in British Guyana, Now Guyana to Samuel Solomon and Feodore Cromwell. Samuel grew up in Buxton Village and at a very young age he began to be the role model for... View Obituary & Service Information

The family of Samuel Edison Cromwell created this Life Tributes page to make it easy to share your memories.

Samuel (Sammy) Cromwell, the eldest of 9 children was born on...

Send flowers to the Cromwell family.