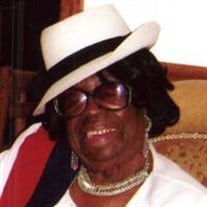 Nancy M. Brown, 97, Ocala, Florida, formerly of Avon Park, Florida passed away on April 14, 2016 at North Pinellas Care Center, Palm Harbor, Florida. Mrs. Brown was born on September 14, 1918 in Cuthburt, Georgia to her parents Steve Butler and Viola (Moore) Butler. Mrs. Brown was a former Farm Worker in the Agricultural Industry and had worked in many different parts of the United States harvesting fruit crops. She was a long time resident of the state of Florida and was of the Baptist faith. She enjoyed sewing, singing, helping people as she was able and volunteered helping sick and elderly citizens in her community. She is survived by her sister: Mary Green of Maryland and many loving nieces and nephews especially her nephew, Larry Williams and his wife Charlotte of Ocala, FL; nieces: Eloise, Mary Louise, Mary Louise “Nita” and Penny; nephews: Adolphus, Steve, Davis and Leon; She was preceded in death by her parents, her husband, Charlie Brown, her brothers, Charlie Bell Butler and George Washington Butler, her sisters: Trutie Mae Thomas Butler, Lottie Mae Appling, Estella Perry and Carrie Rivers. A Graveside Funeral Service will be held on Thursday, April 21, 2016 at 11:00AM at Lakeview Memory Gardens in Avon Park, Florida. On-line condolences may be shared by visiting www.bankspagetheus.com. Arrangements are entrusted to Banks/Page-Theus Funerals and Cremations, Wildwood.

The family of Nancy M Brown created this Life Tributes page to make it easy to share your memories.

Send flowers to the Brown family.