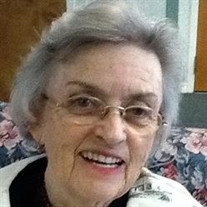 Mary Elizabeth “Beth” Caracaus, 79, of Sebring, passed away on October 31, 2015. She was born on May 7, 1936, in Peoria, IL, to the late Charles and Dorothy McElwee. Mary Beth, as she was known in childhood, graduated from Peoria Central High School and the University of Miami (Fla.). While raising a family in the Miami area with her first husband, Ross, Beth worked as a dental assistant and teacher. She later taught dental assisting at Lindsey Hopkins Technical College in Miami. In 1982, Beth remarried to Richard Caracaus, a Miami Beach police officer. The couple moved to Ft. Pierce and Vero Beach before settling in the Sebring/Avon Park community. Beth was a substitute and home economics teacher at Sebring High School from 1995-2004 and was affectionately known by her students as “Mrs. C.” She also worked as a seamstress in Avon Park, fitting wedding gowns and prom dresses. Beth was active in Sebring’s St. Catherine’s Catholic Church and Our Lady of Grace in Avon Park. She was a long-time volunteer with the local Knights of Columbus Columbiettes women’s group. Earlier in life, Beth was a member of the Kappa Kappa Gamma social sorority and was active in the national alumnae group. She was a noted baker and brought homemade Christmas cakes to family friends for many years in the Miami area. Beth is survived by her daughter Catherine Young of San Diego, son-in-law Michael Buhai, son Charles Young (Lesli) of Camp Hill, PA, brother Joseph Dalton McElwee of Miami Beach, and five grandchildren: Katie and Michelle Buhai, and Molly, Jackson and Maxwell Young. She was preceded in death by her sister, Johanna Orth of Peoria. There will be a viewing and Holy Rosary from 5-7 p.m., Friday, Nov. 13 at the Stephenson Nelson Funeral Home in Avon Park, and a funeral Mass at 10 a.m., Saturday, Nov. 14, at Our Lady of Grace Catholic Church, Avon Park, before Beth is laid to rest in the Lakeview Memorial Gardens. In lieu of flowers, friends may make a contribution to the Alzheimer’s Association, P.O. Box 96011, Washington, D.C. 20090-6011 (www.alz.org)

The family of Mary Elizabeth Caracaus created this Life Tributes page to make it easy to share your memories.

Mary Elizabeth “Beth” Caracaus, 79, of Sebring, passed away on...

Send flowers to the Caracaus family.