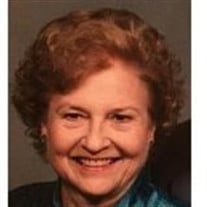 Marjean Halopka&#8217;s story as told in her own words in 1993: Every person who lives on this earth has an interesting story to tell and so I would like to write mine. I am Marjean Metzger Koperski Hang Halopka born June 8, 1924 in Panama City,... View Obituary & Service Information

The family of Marjean M. Halopka created this Life Tributes page to make it easy to share your memories.

Send flowers to the Halopka family.