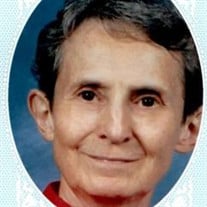 Jean Fitch of Avon Park, FL passed away on October 22, 2016. Jean Eleanor Bogdon Fitch was born on February 5, 1932 in Hinsdale, IL to John Bogdon (Regina, Saskatchewan, Canada) and Mabel Munson Bogdon (Jamestown, NY). They made their home in Brookfield, IL with her two sisters, Grace and Evelyn. Jean married William Fitch of Chicago, IL on August 19. 1951. Bill and Jean began their married life in Illinois where Bill taught school for a couple of years. They then moved to Venezuela where they were missionaries for 11 years. They returned to the United States where they served at Broadview Academy in Illinois and Platte Valley Academy in Nebraska. Bill also served as Pastor for both Academies and Jean occupied the role of the Pastor’s wife. Jean obtained a degree from Northern Illinois and taught secretarial classes at Broadview Academy. While in Nebraska, she also worked outside the home. Upon retirement, they made their home in Avon Park, FL. Preceding her in death was her husband, parents, sister Grace and nephew Preston Fletcher. Jean is survived by her son Donald (Becky) of Kearney, NE and daughter Karen (David) Lincoln of Nevada, IA. Grandchildren Ryan Fitch (Kate), Ethan Fitch and Clarissa Lincoln. Great Grandchildren Maggie and Paige Fitch. Her sister Evelyn Rost of Oregon, nephews Greg Fletcher, Jon Fletcher, Richard Chubb, George Chubb, Greg Fitch, and nieces Sharon Bishop and Betty Ann Zaleski also survive her. A visitation for family and friends will be held from 7 p.m. to 9 p.m. on Thursday, October 27, 2016 at Stephenson-Nelson Funeral Home in Avon Park, FL. A Graveside Service will be held at 1 p.m. on Friday, October 28, 2016 at Lakeview Memorial Gardens in Avon Park, FL.

The family of Jean Eleanor Fitch created this Life Tributes page to make it easy to share your memories.

Send flowers to the Fitch family.