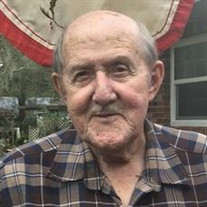 George Samuel Shultz was born on March 26, 1932 and passed on May 8, 2018 peacefully at home after a long illness. He was preceded in passing by his parents Horace Tipton and Linda Mae Shultz, and siblings Agnes Owenby, Elizabeth Pitts, Clifford Shults, Beatrice Mantooth, Bill Shultz, Deanne Gough, and Peggy Lewis. He is survived by his wife of 66 years, Lilly and children Janet Shultz Rowlson (Mike Rowlson, deceased) of Tampa, Sandi Shultz Zwayer (Tom) of Sebring, and George Shultz, Jr. (Sharette Longabaugh Shultz) of Chiefland. Grandchildren and Great-grandchildren Brian (Kylie) Rowlson (Morgan, Noah) of Charlotte, NC, Justin (Andrea) Rowlson (Sadie, Owen) of Tampa, Alan (Melissa) Adair (Aidan and Bailey) of Winter Haven, FL, Angie (Ross) Porter (Sydney, Kaylyn and Lilly) of Sebring, FL, Kyle (Bren) Shultz (Bree and James Wade) of Chiefland, FL and Sam (Nicole Davies) Shultz of Chiefland, FL. Coming from a large family, George was also blessed with numerous nieces and nephews. George was born in Cohutta, Georgia and grew up in the mountains of Tennessee. He lived in Bridgeton, New Jersey, and Wauchula, Florida before settling in Sebring in 1961. He worked at the Herald Advocate in Wauchula from 1957-1960, and The Sebring News from 1961-1972 before venturing out with his own print shop, Shultz Printing, in 1972. He served the communities printing needs for 32 years before retiring in 2004. George was known to all as one of the most kindhearted men with a wonderful sense of humor. He enjoyed camping, fishing, hunting and visiting the mountains of North Carolina. But most of all he loved spending time at family gatherings with his children, grandchildren and great-grandchildren. A private Celebration of Life to be determined at a later date. In lieu of flowers, please consider donations to Vitas Hospice, Shriners Hospital for Children or the Leukemia or Lymphoma Foundations in memory of George. Services entrusted to: Stephenson-Nelson Funeral Home 4001 Sebring Parkway Sebring, FL 33870

George Samuel Shultz was born on March 26, 1932 and passed on May 8, 2018 peacefully at home after a long illness. He was preceded in passing by his parents Horace Tipton and Linda Mae Shultz, and siblings Agnes Owenby, Elizabeth Pitts, Clifford... View Obituary & Service Information

The family of Gerorge Shultz created this Life Tributes page to make it easy to share your memories.

Send flowers to the Shultz family.