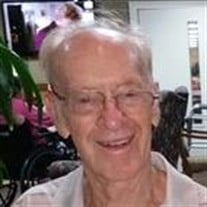 Eugene “Red” A. Hinman was born on January 21, 1933 in Riceville, New York. He was the son of Lester Hinman and Catherine Feldman Hinman. His wife of over 40 years was Marilyn Woodford Hinman. Red had five children: Michael Alfred Hinman, Joan Marie Watt, Lori Lee Deming, Susan M. Stephens and David R. Stephens. He had seven grandchildren: Tonja Jean Hinman, Michael Hinman, Jason Vincent Weaver, Phillip Eugene Jennings, Nebraska Michael Watt, Leah M. Sillen, Douglas B. Stephens and M. Elise Stephens. Red had 6 great grandchildren. Eugene graduated from Ellicottville High School with a business degree in 1952. While serving in the United States Air Force (1952-1957), he was named Airman of the Month in Project Red McCoy medical administration. He was stationed at Pinecastle AFB for 30 months, went to Ramsey AFB and then to Puerto Rico SAC Command. Red worked for Quality Markets for 32 years. He was manager of the Ellicottville store for 25 years, then moved on to Olean, North Warren, Hazeltine and the Foote Avenue store. Red was 1st Vice Commander in the American Legion for 6 years and 2nd Commander for 4 years. He was a lifetime member of the American Legion organization. After retirement, he and Marilyn retired to Pine Island and then to Sebring, FL where they currently reside. He was preceded in death by his: parents, sister Joan Marie Hinman, brother George Elton Hinman and grandson Nebraska Michael Watt. Surviving are his sister Shirley Mae Ditcher and brothers; Dennis Robert Hinman and Kenneth Dean Hinman. Viewing will be on Friday June 30th at 1:00 PM at Whispering Pines Baptist Church, with services (2:00 PM) and graveside services to follow. In lieu of flowers, donations can be made to the Whispering Pines Baptist Church.

Eugene &#8220;Red&#8221; A. Hinman was born on January 21, 1933 in Riceville, New York. He was the son of Lester Hinman and Catherine Feldman Hinman. His wife of over 40 years was Marilyn Woodford Hinman. Red had five children: Michael Alfred... View Obituary & Service Information

The family of Eugene A. Hinman created this Life Tributes page to make it easy to share your memories.

Send flowers to the Hinman family.