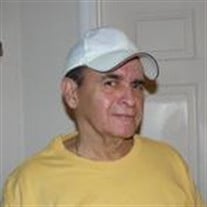 Carlos Manuel Cardona Sr. was born on August 24th, 1944 in Fajardo, Puerto Rico. His birth parents were Pedro Cardona and Angelina Nieves Cardona (both deceased). Carlos's life is a tremendous testimony of God grace and mercy. He lost his mother at the age of 2 after she gave birth to his sister who also passed at childbirth. Shortly after her death, Carlos's father turned him over to the care of his aunt and uncle, Julio and Dominica Seda Vasquez, lovingly known as Nino and Nina and His grandmother Otelia Perez and was raised in Mayaguez, Puerto Rico. Nino and Nina, were not able to have children of their own so they loved him as their own. At the age of 16 he moved to Brooklyn New York to be reunited with his father who was now married to Maria Cristina Rosado Cardona (deceased) and his many brothers and sisters. The eldest brother Victor Cardona (deceased), Isabel Lopez, Maria Perez, Ana Sanchez, Peter Cardona Jr, Hector Cardona, Noel Cardona, Noemi Caraballo and Edward Cardona. Carlos loved and cared for his family deeply. He was loved deeply in return by his family always being an amazing big brother and playing a role no one else could fill. Carlos worked many years as an elevator operator and doorman in midtown Manhattan and eventually met and married the love of his life Alice Socorro Zapata whom he is survived by and they were married on April 17th, 1971. They raised 4 children together whom He is also survived by, his son Raul Diaz and his wife Patricia of Manhattan NY, Lissette Allison and her husband Christian Allison of Sebring FL, his son Carlos Cardona Jr of Miami, FL, and his daughter Melissa Cardona of Youngstown, Ohio. After living many years in New York, they eventually moved to Florida in 1989 where they have stayed for the last 27 years. Over the years the family continued to grow with many grandchildren, Ariel, Raul Jr, Eliana, Jasmine, Carlos Isaiah, Elizabeth Marie, Joseph, Noah, Angelina, Elizabeth Alice ,Rainie, Hadassah, and Mycah. He also was blessed with 2 beautiful great grandchildren Joseph and Asher. Carlos lived many years as a good man but it can be said that his life really didn't begin until he surrendered his life to Christ in the early 1980's. He served many years as a deacon in a church on the lower east side of Manhattan called Trinity Assembly of God and always served faithfully wherever he was. He couldn't go anywhere without telling someone about the love of Jesus. He was gifted with the heart of an evangelist and a soul winner for the kingdom of God. Countless lives have come to know Jesus through his life ministry. He was an awesome man of God who served the community with his many ministries including visiting and praying for the sick in local hospitals, ministering and visiting the elderly in nursing homes, witnessing and sharing testimonies to inmates in prison, and spiritually mentored men in drug rehabilitation centers as well as serving constantly for his church preaching the love and forgiveness of Christ and repentance. Carlos's ministry knew no borders and and he would share Jesus with anyone anywhere anytime never being ashamed. To those that knew him best and where closest, he was a spiritual father, mentor and friend. He most recently served through his church Iglesia Cristiana Jerusalem in Avon Park, FL. where he continued to touch many lives. Carlos has left a legacy of love, humbleness, and integrity that men can only hope to accomplish. As we gather here today to remember and commemorate his life, we will always remember a man who brought joy and fulfillment to many, and who's legacy will live on forever. He will be missed, loved, and remembered forever. Rest in peace faithful servant of God.

Carlos Manuel Cardona Sr. was born on August 24th, 1944 in Fajardo, Puerto Rico. His birth parents were Pedro Cardona and Angelina Nieves Cardona (both deceased). Carlos's life is a tremendous testimony of God grace and mercy. He lost his... View Obituary & Service Information

The family of Carlos Manual Cardona created this Life Tributes page to make it easy to share your memories.

Send flowers to the Cardona family.